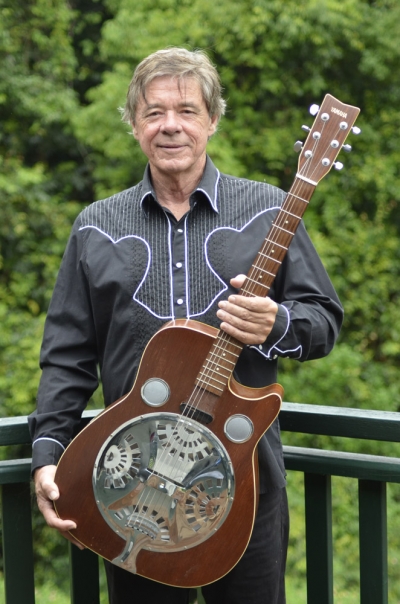 ABOUT THE WRITER :  Featuring the show's writer Barry Ferrier (aka Dr Baz) as Johnny Cash.

Barry gained wide experience in music theatre in his early career. He appeared in the original cast of “Jesus Christ Superstar“ at the Capitol Theatre in Sydney and the Palais in Melbourne, and “Joseph & the Amazing Technicolour Dreamcoat“ at Sydney's Seymour Centre; and as a member of the internationally famous Lindsay Kemp Mime Company, co-composing with Andrew Wilson the score for Kemp's production of Oscar Wilde's "Salome", which had a sell-out season at the Roundhouse in London.

He was a recording artist for RCA, appearing on the ABC’s “Countdown” and opening for Ry Cooder at the Palais in Melbourne.

He played bass with chart topping pop group “The Ferrets”. Later he worked as music director and composer at the Queensland Performing Arts Centre, Brisbane, winning the A.S.E.A. Award for Excellence in the Arts for his live soundtrack to "Solomon and the Big Cat" and writing and directing an innovative high tech theatre production "Dreams and Machines" in the QPAC Concert Hall.

As a musician he has appeared as support for many eminent Aussie music acts including Cold Chisel, Dragon, Divynals, Norman Gunston, the Black Sorrows and Icehouse. He was also band leader and guitarist for legendary superstar Eartha Kitt on her 1994 Australian national tour. He has performed in Europe and the UK and at the Byron Blues Festival, Splendour in the Grass, Gympie Muster, Blues on Broadbeach,  Airlie Beach Music Festival and the Tamworth Country Music Festival.

Barry Ferrier is a versatile musician - a multi-instrumentalist, with exciting skills on guitar, piano, flute and accordian and vocalist with a deep resonant voice. He is also an award winning songwriter with 7 NCEIA Dolphin awards to his name including Best Jazz Artist and twice for Best Blues artist, and a number of other awards for film scores, stage shows and radio programmes he has penned.

View the embedded image gallery online at:
https://johnnycashtribute.com.au/index.php/australian-johnny-cash-tribute-musical-cast/barry-ferrier-johnny-cash#sigProGalleriaec5e0d3dab
back to top